Remembering the life of a gifted actor-director, restaurateur, but above all spiritual seeker

One of the curious things about our present-day world with its emphasis on the secular and the material is that when people make spiritual choices it’s almost as if they’ve fallen off the edge of the earth. They seemingly no longer exist to people who only measure secular activity. They become unpersons, particularly to hardline anti-cultists.

How strange that people whose days are filled with activities and whose lives are filled with meaning are simply written off as “lost” by those who take an extreme worldly view. Yet, when people make spiritual choices, they continue to breathe oxygen, to eat food and drink water, to plan and dream, to care for others and be cared for. That they do these things in a broader context of service to God or pursuit of spiritual enlightenment does not lessen their humanity.

When Ketan Goldman Tamm passed away in March 2014, it marked the end of a life filled with activity and service. He ran the Panorama of My Silence-Heart Café, which offered more than lattes and loving-kindness: it became a hub of community activity. According to reviewer Julia Lofaso:

Events held there have ranged from community board meetings, elementary school class plays and meatless barbecues to demonstrations by local raw food devotees, performances by Brazilian opera singers and a dramatic President’s Day reading of writings by the founding fathers. Local musicians come to play at Panorama’s recurring Edible Jam while listeners partake in a tasting menu of desserts, all of which feature jam. And, of course, there’s always a chance that [Guinness record holder Ashrita Furman] will walk in and start snapping celery stalks in half or cracking eggs against his forehead in rapid succession.

Ketan was first and foremost a spiritual seeker. Before settling down to run the Panorama Café, he traveled the globe, arranging meetings and events for his teacher, Sri Chinmoy, with the goal of inspiring a more harmonious world. Ketan also loved theatre, and enjoyed directing and acting in plays.

Ketan doing his roadwork with the World Harmony Run, on the island of Jamaica, 2005 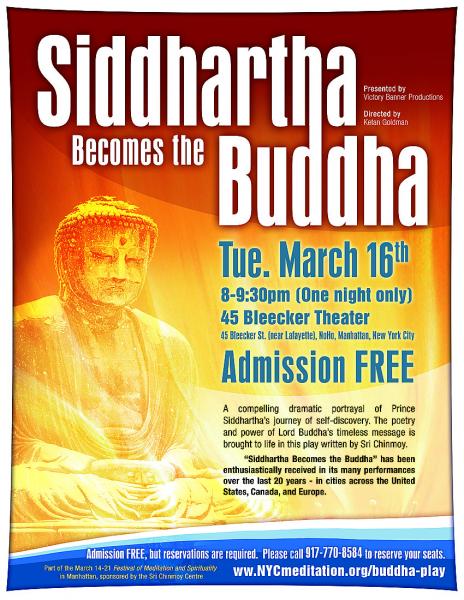 The Buddha character from Ketan’s play

In New York last night, Wednesday, 26 March, we had a wonderful function dedicated to the memory of our dear brother, Ketan, who unfortunately passed away last Saturday evening, March 22, at the age of 46, due to a variety of illnesses.

The tribute continued well past midnight as we fondly recalled our sweetest memories of Ketan and his dedicated service to Sri Chinmoy’s path. I personally have known Ketan since he was four years old and was quite happy to be part of this tribute to a great friend and spiritual brother.

After a peaceful silent meditation there were many readings by relatives and close friends. A touching story that Ketan himself wrote was read out first — a true story about the first time that Guru referred to him as ‘my Ketan.’ There were other stories of Ketan when he was quite young, about his interactions with Guru and disciples. Some moving poems written by Ketan were also recited.

A stage was set up with very large photos of Ketan, some with Guru, one with Gopee, and one with Guru and Ketan’s father Richard, at the opening of Panorama in 2007. Richard and his brother, Ketan’s uncle, were also present at this function and they seemed quite moved by this very sweet tribute.

Richard told a story of how he used to take Ketan to Golden Gate Park in San Francisco where Ketan was born. He would follow baby Ketan around (then known as Max), and enjoy his young son’s joy at interacting with the flowers and nature. He felt that little Max was teaching him how to appreciate and enjoy the beauty of our natural environment.

There were many songs sung for Ketan during the course of the evening — one by the Aspiration-Ground guards to honor Ketan, who was one of their members. Four songs that were written by Sri Chinmoy specifically for Ketan were also sung by some of the Centre singers. Jibaner Bhar was sung by everyone towards the end of the night. This is a song designated by Sri Chinmoy to be sung when a disciple or close friend of the Centre passes away.

There were a few instrumental offerings, including Premik on flute, Srinvantu, and Heart-Dawn music group. Videos were shown towards the end, including the grand opening of Panorama in August 2007 with Sri Chinmoy. Ketan and his father Richard, along with many disciples, were there as Sri Chinmoy walked through the café, then sat for quite awhile as people enjoyed the great food and beautiful ambience of this Divine Enterprise which still exists to this day.

Many stories recalling Ketan’s firm dedication and service were related by Ketan’s friends. Some stories were quite amusing and some were emotionally moving as we vividly recalled Ketan’s wonderful personality and sincere dedication to manifesting Sri Chinmoy’s spiritual ideals, offering Peace, Joy and Light to humanity at large. Ketan was a good friend to many, many people over the decades. His unique talents included his love of the theatre and capacity to produce and direct Sri Chinmoy’s plays, both in private functions and for the public.

Ketan was involved in Sri Chinmoy’s running and tennis during the 80s and 90s, as well as his weightlifting training and demonstrations. This included keeping track of Sri Chinmoy’s workouts and his ‘Lifting Up the World With A Oneness-Heart’ achievements. Ketan loved to meet the famous athletes, musicians and actors that he would introduce to Sri Chinmoy, who would then honor them in lifting ceremonies.

Finally, in remembering Ketan’s life of dedication and service, we could all be uplifted and inspired to show the same dynamic energy that Ketan embodied in such sincere fashion. It was truly a joyful tribute to such a great soul who we will sadly miss, but at the same time we feel so happy and grateful that he was with us for so long, offering so much to the world and to his spiritual family and his Guru as well.

I hoist my Lord’s Victory-Flag, I hoist today.
I bow to my Lord Father Supreme,
O my Boatman in Your Cosmic Play.