When writing “Remembering Teddy Roosevelt in the Era of Trump” almost two years ago, I made mention of a certain, ahem… item:

The Trump teddy bear, only $79.95 from vermontteddybear.com. Vomitorium not included.

I assumed it was the worst piece of kitsch that Trumpists could come up with. Boy, was I wrong! What is kitsch, anyway? Google’s quick retort:

Art, objects, or design considered to be in poor taste because of excessive garishness or sentimentality, but sometimes appreciated in an ironic or knowing way.

This definition helps explain why Trumpy Bear is so popular with liberals, despite being marketed to the Trumpistas who watch Fox News:

Firstly, liberals thought it must be a parody or hoax cleverly put over to make Fox News look like an even stupider platform than it already is. Surely this can’t be for real!

Secondly, once it turned out to indeed be a real product marketed to Trump TV viewers, it reaffirmed the notion (widely held by Eastern liberals) that Trump supporters simply have no taste whatsoever! Thus, it (ironically) manages to please both camps in wholly different ways. As a prospective Christmas, Chanukah, or Kwanzaa gift, it definitely has crossover appeal. It’s also cheaper by half than the Vermont teddy bear, while packing twice the kitsch.

To paraphrase an old saw attributed to actor Edmund Kean: Dying is easy, satire is hard. In fact, it’s almost impossible now, because Trump is arguably the first American Dada president (though Nixon came close). The Guardian’s Australia columnist Van Badham says it best: “A thousand satirists with a thousand typewriters could not invent this in a thousand years.”

Nevertheless, see “Scott Pruitt: Of Mattresses and Moisturizer,” in which Kirstjen Nielson has disappeared, Trump has resorted to cannibalism, and Sarah Sanders defends him to the bitter (too much mustard?) end. Also featured: “Sheriff” Sean Hannity as Trump’s new Chief of Staff.

The commentariat class keeps getting hoodwinked by Trump’s tweets etc., convinced they must be from The Onion, but turning out to be real Trump comments claiming that people who buy cereal need to show ID. (Not usually true, except for R. J. Reynolds branded cereals, or certain communities where there are large concentrations of cereal abusers.)

No teddy bear jollity in Paris, though, where leaders of European nations were met by a broody Trump having a bad makeup day. (Melania applied too many coats to the left cheekbone.) 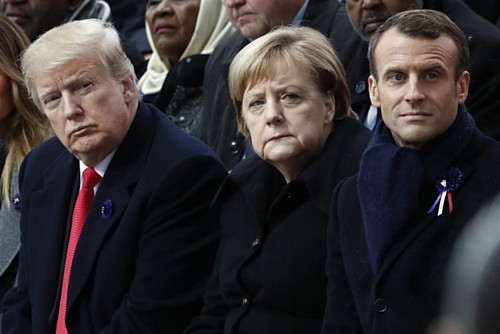 Angela Merkel channels Chandler Bing: “Could I BE any more uncomfortable?”

Only one question remains: How could Trumpy Bear be made into an even more over-the-top expression of right wing kitsch? Maybe it could come with a free AK-47 and a self-burning cross that doubles as a nite lite.

The elderly gent billed as “Corporal Frank Warholic” lends himself to the obligatory MST3K riffing: