The quality of thuggishness is not strained.
It droppeth as the chilling rain from Moscow
Upon the place nigh Trump. It is twice blest:
It blesseth him that gives and him that’s on the take.

In early 2018, I wrote a piece called “Drain the Swamp” or “Pad the Reptile Fund”? which still gets lots of views. Using careful language, I explored the stylistic similarities between Donald Trump’s operations and organized crime, as well as the parallels with Watergate. I noted that there’s just too much Russian money sloshing around Trump.

Given the recent release of a “trove” of documents produced by Rudolph Giuliani’s crony Lev Parnas (who is under indictment), the parallels have become more striking — particularly the series of WhatsApp messages between Parnas and Robert Hyde. 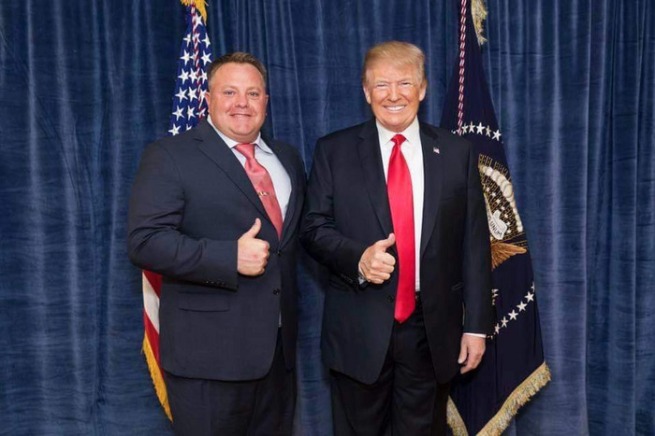 While the matter has yet to be fully investigated, the implication is that Hyde and Parnas had Ukrainian thugs surveilling anti-corruption U.S. diplomat Marie Yovanovitch, and at one point these thugs suggested that for a price they could have Yovanovich “removed.”

This underscores the sense that Trump is always on the wrong side of history — that in the struggle between light and darkness in world politics, Trump is broadly on the side of darkness. He’s the bad guy tying the heroine to the railroad tracks, or having his thugs do the dirty work, possibly with a couple of layers of deniability interposed.

Among the documents released on January 14 was a copy of a letter sent by Rudy Giuliani to the newly elected president of Ukraine stating that: “In my capacity as personal counsel to President Trump and with his knowledge and consent, I request a meeting with you.”

This helps remove some of the plausible deniability with which Trump typically shrouds his most sinister activities. Lev WHO? I don’t know anything about it. You’d have to ask my lawyer. Maybe Lev is a client of Rudy’s, or Rudy’s a client of Lev’s. What’s that you say? Hours of home movies of me, Lev, Igor, and Rudy frolicking poolside? A million dollars sent from a Russian bank account? That can’t be right. After all, I’m only in the cement and contracting bidness…

In my imagined Trump denial, I’m embellishing (as in the part about hours of home movies). But there are enough pics of Trump and Parnas together to make a slideshow.

In the prior piece, I wrote:

[Michael] Cohen’s role as fixer and cutout man is not a traditional lawyer-client relationship to be sure; but it is a relationship that might be worked out between two longtime business partners who are veterans of many shady deals or operations where things need fixing, and who both understand the role which each man needs to play, and the type of public denials which each man needs to issue.
…
Slush funds and cutout men are hardly unknown in the world of Washington politics. During the Nixon administration, Nixon’s personal lawyer Herbert W. Kalmbach recruited private detective Tony Ulasewicz to be the “bagman” who delivered cash to Watergate burglars in order to buy their silence.

In our topsy-turvy world, those who have studied the law or worked in law enforcement are sometimes used to find creative ways to skirt the law. Bagman Ulasewicz was a retired NYC police detective. According to the above-linked Times article, “The [Watergate] hearings turned more sober when Mr. Ulasewicz acknowledged that his bagman role was part of a criminal enterprise.”
…
These characterizations suggest that what investigators armed with a boatload of evidence are finding is not just isolated acts of wrongdoing, but a pattern of organized corruption — corruption which would be undesirable in the world of real estate, casinos, and beauty pageants; but is wholly unacceptable in and around the White House.

Since that time, Michael Cohen has been sent to prison, and Rudy Giuliani has replaced him as Trump’s fixer. If this were the plot of a novel, the reader would begin to suspect that it won’t be long before Giuliani joins Cohen in the slammer.

When did Giuliani go over to the dark side, and begin working for the Trump crime family? (which doesn’t push heroin or engage in street level extortion, but has certainly been linked to white collar crime, e.g. Trump University, and Trump’s fake charity used for personal benefit).

Giuliani was once known as “America’s Mayor” and the antidote to hateful stereotypes of Italian-Americans as mafiosi.

“When they say John Gotti, you tell them Rudolph Giuliani!” the motivational speaker at a church social tells a group which actually includes mafia wives. This episode of The Sopranos was filmed in 2002, when Giuliani’s reputation was still riding high. What a blow to law-abiding Italian-Americans to find Giuliani now rubbing elbows with the Ukrainian underworld, and neck deep in Trump’s political chicanery.

These days, Giuliani is cleaning up after the elephants, and creating his own media circus in the process. It remains to be seen why Lev Parnas paid the former New York City Mayor something like $500,000, or where the money came from. One thing’s for sure: Giuliani ain’t working for peanuts!

As for Trump, he’s in the same pickle as Nixon: There’s just too much illegal stuff that needs to be swept under the rug, too much silence that needs to be bought, and too many henchman that Trump needs to deny knowing.

History doesn’t repeat itself, but it does rhyme. When Trump threw Cohen under the bus, that was when Cohen turned state’s evidence. And when Trump denied knowing Lev Parnas (or knowing what he does), that was when Parnas likewise flipped.

Even as I write, the teasers for Rachel Maddow’s January 15 interview with Parnas are already circulating — an interview in which Parnas reportedly says: “President Trump knew exactly what was going on. He was aware of all of my movements. I wouldn’t do anything without the consent of Rudy Giuliani or the president. … I was on the ground doing their work. … It was all about Joe Biden, Hunter Biden. It was never about corruption. He [the president] lied.”

When it comes to Trump and his cohorts, we are rapidly moving beyond the point of outrage fatigue. But it remains shocking that the Republican-controlled U.S. Senate is poised to ignore the massive evidence showing beyond a reasonable doubt that Trump is a crooked character who is undermining the ideals of American democracy on a daily basis, and turning America into a villain on the world stage.

This, Trump has been doing for quite some time. That’s why I called for his impeachment fully two years ago, almost to the day. Once you know the fox has gotten into the henhouse, you don’t wait for the last chicken to be eaten.

We all know how history will be written. The fact-free bubble in which Trump presently exists will be pricked, and he will be viewed as a corrupt president on a par with Nixon.

The Republican Senators who will judge Trump’s case crave money, power, and legacy. Money and power they may manage to cling to a little longer, even if they engage in a knowing cover-up of Trump’s extensive wrongdoing. But we know what their legacy will be: They will be viewed as spineless cowards, and corrupt enablers of Donald Trump.

One comment on “Trump administration: The quality of thuggishness is not strained”