BBC Series like Doctor Who and The Rev. have had a go at Dawkins, and so has Victoria Coren Mitchell in The Guardian.

I don’t often write about Richard Dawkins, but doing so gives me a chance to drop in bits of British slang like “putting the wind up” and “taking the mick.” While taking the mick at the expense of Dawkins may not be ultra-civilised, it’s a leisure sport that some in the UK media can’t resist. And let’s face it, he kind of deserves it… END_OF_DOCUMENT_TOKEN_TO_BE_REPLACED

What is the ideal balance between faith and reason? Do people have a right to choose faith over reason, at least in matters of faith? The U.S. Constitution says yes. 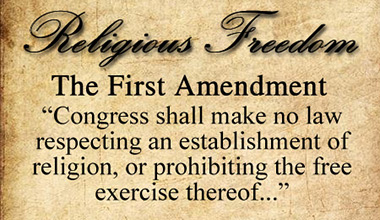 We’ve been exploring the problem of vilification of spiritual minorities by anti-cult groups. In Part 3 we discussed how hate material poisons the public information space, making people afraid to follow their conscience in spiritual matters for fear of what may be done to them by aggressive majoritarians.

Our consistent theme has been that even as anti-cult tactics have shifted from physical coercion to psychological coercion, the ACLU should still be concerned about the manner in which some anti-cult activities abridge the civil rights of minority adherents. END_OF_DOCUMENT_TOKEN_TO_BE_REPLACED

People should be able to choose a minority faith without expecting the Spanish Inquisition.

RECAP: In Part 1 we talked about the deprogramming era and how the ACLU helped to end it. In Part 2 we explored the transition from deprogramming to exit counseling, from physical coercion to psychological coercion. Our persistent theme is that the ACLU should still be concerned about the plight of minority adherents, since the manner in which the latter continue to be harassed by anti-cultists remains violative of their religious freedom and core civil rights.

Part 2 ended with a discussion of techniques and jargon associated with exit counseling and “cult recovery” groups. We talked about the way that former spiritual seekers are resocialized to view themselves as “cult victims,” and encouraged to generate atrocity stories in order to justify and reinforce this new identity based on victimhood.

It’s helpful to be able to decode anti-cult jargon, since it contains a plethora of stereotypes and bigoted assumptions built right into the language itself. A person who has a spiritual experience has fallen victim to a “dissociative disorder,” while a person who comes to feel closer to God through prayer, meditation, and reflection suffers from “delusions of grandeur” brought on by “cult mind control.” Devotion to a spiritual figure is “an unnatural fixation caused by lack of a strong father figure during adolescence,” while self-giving is “an ego disorder,” and community involvement constitutes “a life wasted in the cult.”

What’s obscured by such anti-cult jargon is the ineffable quality of joy often experienced by minority adherents, and the meaningfulness of their lives. END_OF_DOCUMENT_TOKEN_TO_BE_REPLACED