Enjoy this ultra cool retrospective, plus discussion of The Twilight Zone, Doctor Who, Mystery Science Theater 3000, and The Bobbsey Twins. More Storm Emma too.

“Snowmen of the world unite! You have nothing to lose but your carrot noses!” 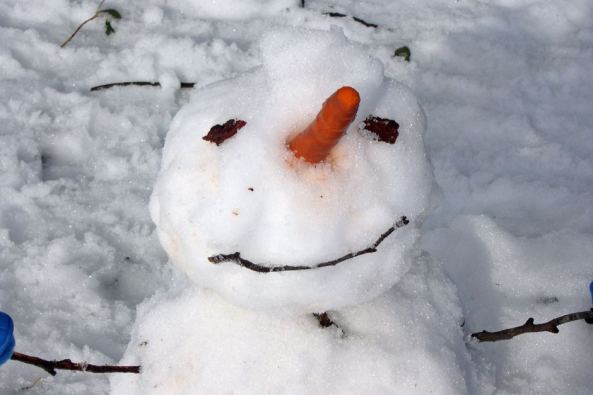 UPDATED! It’s no secret that I love snow. As we close out winter once and for all (a freak May Day snowstorm notwithstanding), I wanted to post these Top 5 Retro Snow Videos from the UK. I’d already stumbled on them when doing my earlier top snow videos post, themed on Storm Emma and Beast from the East. I hope you saw it, because in addition to some really beautiful snow scenes shot by everyday people, it also included a laugh-out-loud clip of Piers Morgan doing his Yorkshire and Hampshire accents, bringing ITV’s Good Morning Britain to a grinding (but hilarious) halt.

These retro clips have a different character, putting us in touch with snows that fell long ago on a different world. Why should we care about a snow that fell in 1947 or 1963?

Writing in an American populist vein, W.P. Kinsella — author of Shoeless Joe (later made into the film Field of Dreams) — suggested that “the one constant through all the years has been baseball.” A romantic notion that works fantastically well in the film, but may have less than worldwide appeal. Snow is another great constant, and as I wrote in Storm Emma and the Meaning of Snow:

There is an individual occurrence of snow, and then there is the archetype of snow. What we want to do is move from the individual to the archetype. Everything has its essential nature, and the nature of snow is that it is holy. Believe in this, and contemplate the falling snow as it blankets even one lone tree.

Viewing snow that fell long ago — before there were things like smartphones, Internet, Brexit, and Trumpkins — may link us with the past and invoke that universal archetype. (In modern parlance, Trumpkins are Donald Trump die-hard supporters; but of course, there was a dwarf named Trumpkin in The Chronicles of Narnia.)

Here then, are my Top 5 Retro Snow Videos from the UK:

The Midnight Sun – Before Global Warming Was a Thing

Science fiction is often good at predicting coming trends and reacting to them emotionally, politically, and sociologically. We are just entering the era of robots as a widespread form of replacement workers, but Kurt Vonnegut’s 1952 novel Player Piano is one of many SF works which dealt with the consequences of automation long before the reality was upon us. Even earlier were Isaac Asimov’s robot stories, nine of which were collected and reframed for the 1950 book I, Robot.

So it is with global warming, which wasn’t a thing in 1961 when Rod Serling penned “The Midnight Sun” for an episode of The Twilight Zone:

Here, the cause of global warming is not environmental abuse and neglect (nod to Scott Pruit), but rather a one-off event: a sudden change in the Earth’s orbit bringing it ever closer to the sun. Through this device, Serling mostly avoided the politics but dealt with the emotional and sociological effects of a superheating planet.

Scary Snow in Doctor Who

New Who famously takes things we think of as pleasing or comforting, and makes them scary — snowmen and angels being two examples. The Doctor Who 2012 Christmas Special (called, appropriately enough, “The Snowmen”) serves up this chilling view:

And not at all scary in Agatha Christie’s Marple:

The idea of retro clips naturally calls forth its opposite: modern inventions which are offshoots of the Space Race. This riotous clip from Mystery Science Theater 3000 #401 (where the movie riffed on is Space Travelers a.k.a. Marooned) lists a bewildering variety of inventions supposedly spurred by the Space Race. “Swirled yogurt: essential for space flight!”

LibriVox vs. the Bobbsey Twins

No, it’s not a Japanese sci-fi title. LibriVox is a wonderful project that makes public domain audio recordings of classic literature readily available on the Internet. The Bobbsey Twins are characters from a long-running series of children’s books written under the pseudonym Laura Lee Hope.

As a child, I inherited a good many hand-me-downs from my aunt on my father’s side, whose cellar piled up with books and toys that her own children had outgrown. So I got an Erector set (an original A.C. Gilbert one), which the British and French would know better as Meccano. I also inherited an ever-burgeoning collection of Bobbsey Twins books, such as The Bobbsey Twins in Tulip Land — a title which promised amazing adventures to my young mind.

Much like myself, the Bobbsey Twins exist in a kind of chronological stasis, with the older pair of twins (Nan and Bert) frozen at 12, and the younger pair (Freddie and Flossie) perpetually 6 years old. I, of course, am perpetually 5, so still look up to my elder literary siblings. 😉

I don’t recall ever owning The Bobbsey Twins at Snow Lodge (1913), but it’s a title that does turn up on LibriVox. So here’s an audio-only retro snow clip read by Rachel and SuperCoconut:

The Bobbsey family was in the 1%. The Bobbsey’s were blessed with the services of an elderly “colored” couple, Dinah and Sam, that had been with them for many years. Dinah did all the cooking for the family, including some tasty fried chicken, and Sam drove a truck for Mr. Bobbsey’s lumber business. If the family lived today, they’d never use the term “colored,” and they’d never remark that the couple had the “whitest teeth the children had ever seen.”

We’re not quite finished with Storm Emma…

I observed no palpable cheering up after my last batch of Storm Emma videos, so here’s a couple more I really like. I’m a city boy, and am moved to see how rural folk (including farmers) cope with massive snow. I also love seeing the seas grown all wild, breaching the borders which men have set for them:

If YouTube often appears to be a vast wasteland, yet it remains a medium for people to share homespun images which can move us by their honesty, and which present an unmediated view of nature.

As the weather heats up, I hope the snow-themed media clips will help you keep cool. I pity NYC carriage horses working when the temperature climbs to 99 in midtown; but they also have to work in snow, as my short film Salvation illustrates.